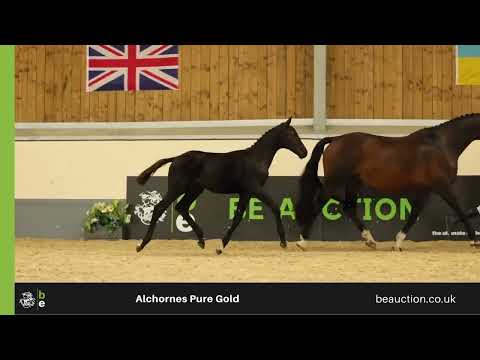 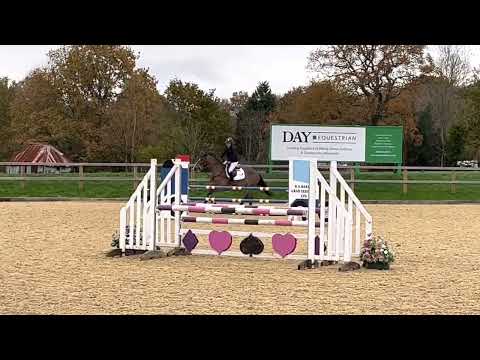 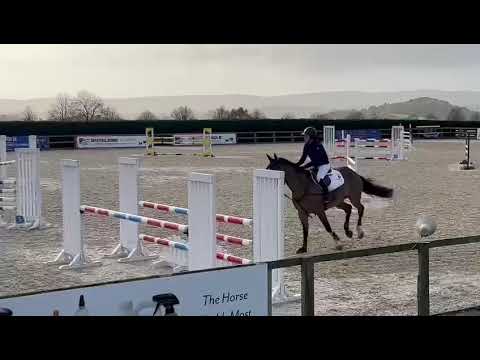 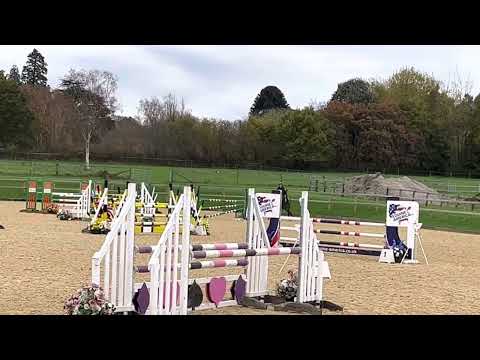 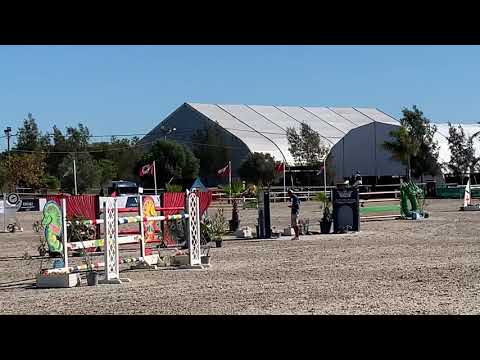 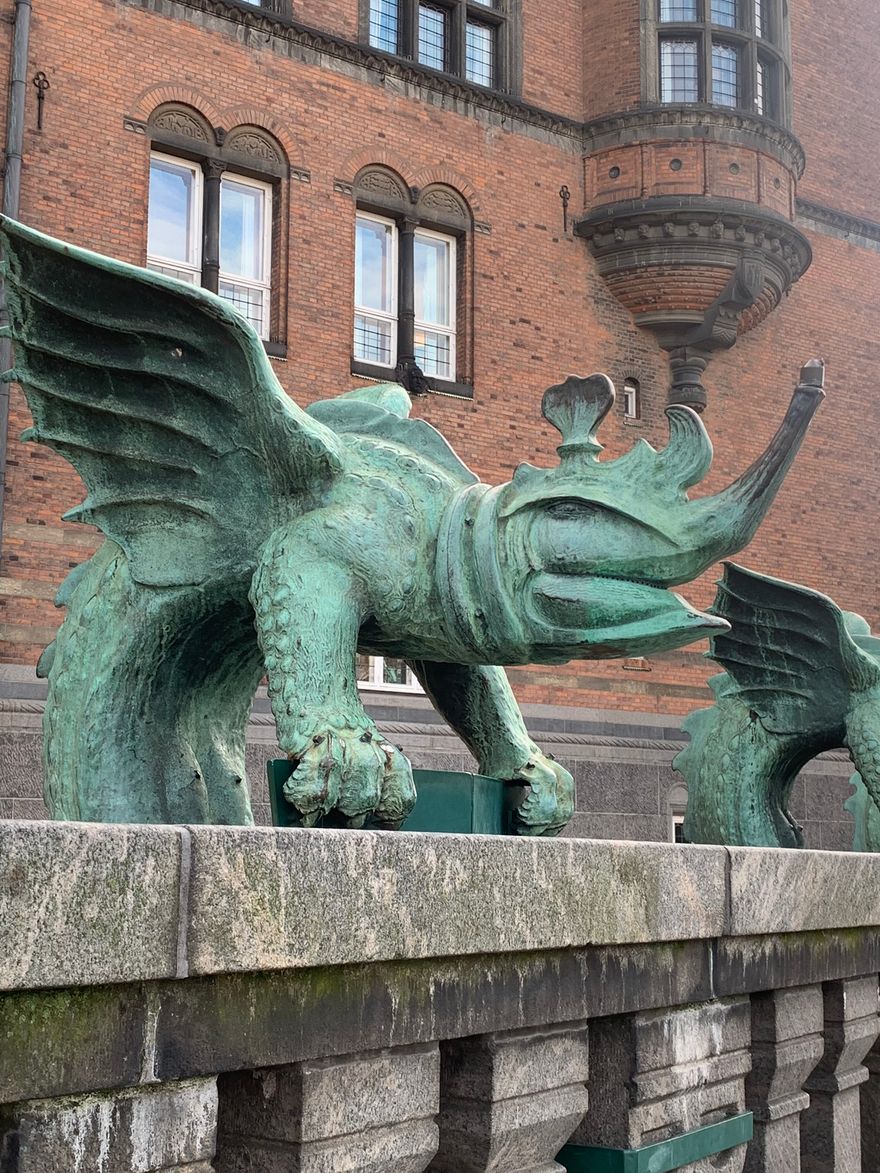 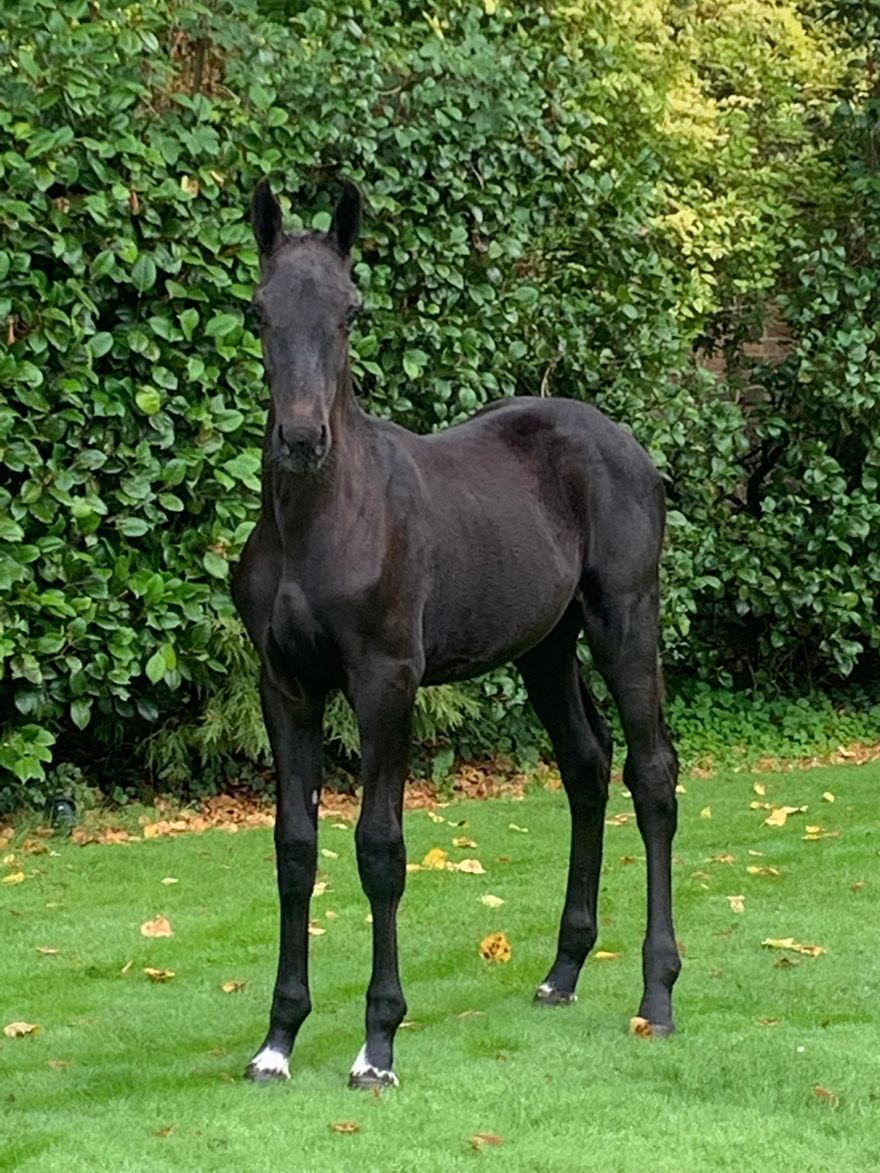 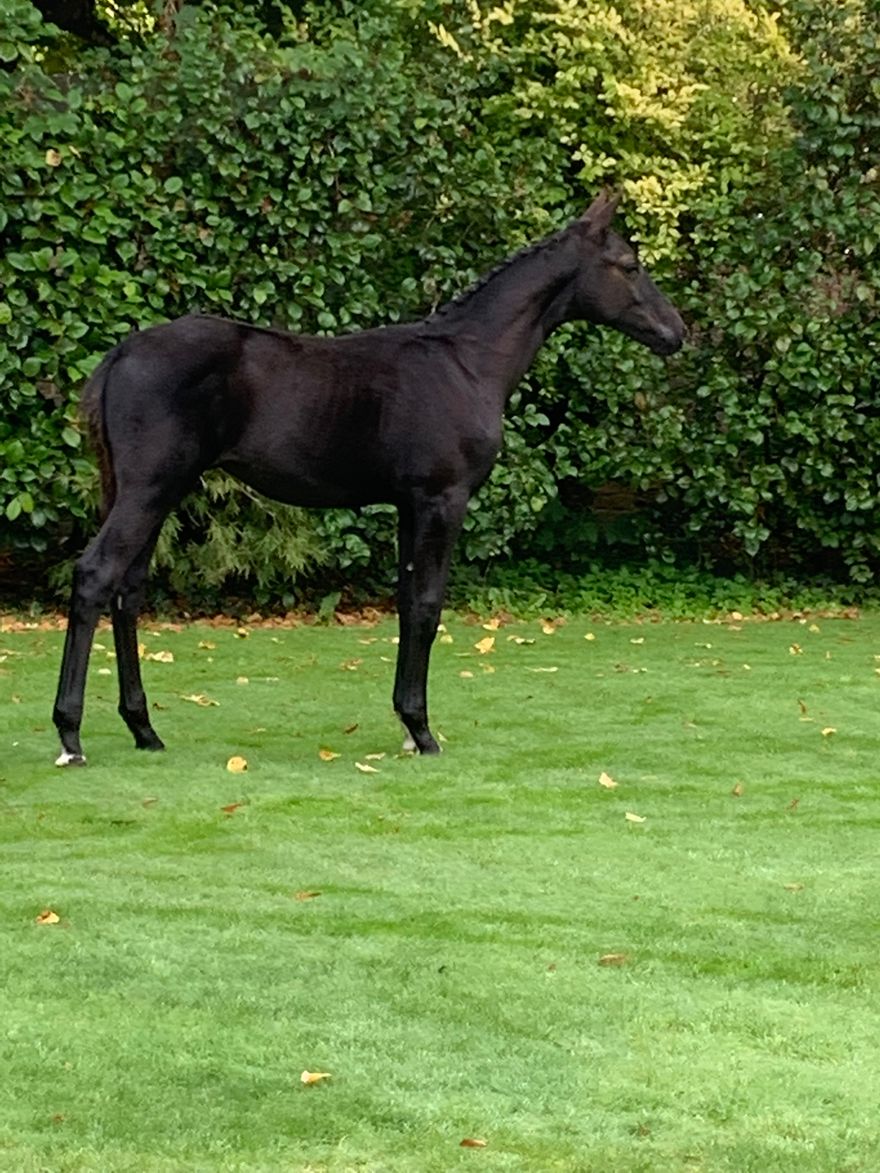 Everyone needs someone who is always just ‘there’ in their team. For me this is Mark, my husband, and number one supporter for the past 42 years. 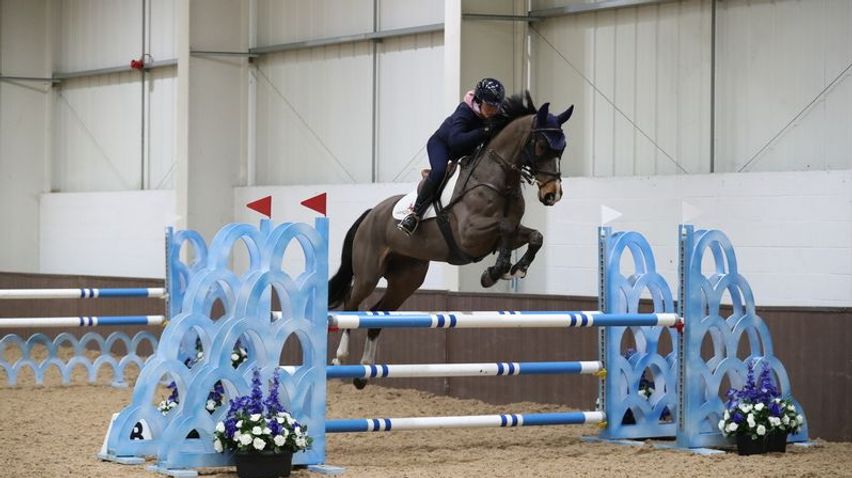 Next stop was a training show at Addington. I was excited to be going back to Addington after a three year absence, and the concept of the training show, where you get two rounds at your chosen height, is perfect for where my horses are in their progress this season.

I felt Askeaton needed another very easy round, so we had a brutally early start, made easy by having both Frankie & Lauren to help. I’m spoiling myself with help for these first few shows to allow Lauren to find her feet with the pace of show grooming, and to feel a little bit more relaxed about time while the horses are still very fresh.

We arrived in perfect time. Askeaton jumped two lovely easy rounds in the 1m. She feels great so fingers crossed we can keep it that way.

The real value of the training show was revealed in being able to go straight in at 1.10 on Breakdance with no pressure, as these rounds aren’t recorded on their BS records. I have made a few changes to his management as he is a little bit nervous, he now has a small dose of Calming Powder from Premier Performance CZ, which I have consistently found to be the best calmer, and we tried the titanium mask from Just Equine as well. Although I managed to get in his way once in each of his first two rounds, and at the second fence in his third round, I was able to keep starting again and posted an almost foot perfect final round. This was a really big confidence and self-belief boost. It was like a show for him, but like training for me. There was plenty going on in both the warm-up and the ring, and he was definitely more focussed on going from fence to fence without worrying about pole-pickers, photographers and other horses.

BE Khalissy then jumped two cracking rounds in the 1.10. She’s a real expert now, my only job is to read the numbers. I feel I have taught her all I can now and she needs a lovely home where she can teach someone all she knows, and fulfil her desire to go a bit quicker and actually be allowed to win things. She has been the most lovely and rewarding horse to produce.

We had a bit of a wait for Arietta to jump in the 1.20. She worked in really well, no acrobatics or objections to other horses and jumped two lovely rounds. A bit too many brakes this time, but having felt so green last year she really feels super confident in her job now.

It was a long journey home and a very long day for all of us. But it was well worth the trip. Many thanks to the team at Addington, sadly I can’t make either of their three day shows, but definitely have some others in the diary. Many thanks to Lauren and Frankie for all their help and to Mark for getting up early and helping me finish so late. A big sigh of relief from Mark as we flew off to India the next day and he was worried about how the lorry, girls & horses would be retrieved from Addington if I fell off!

As always many thanks to Saracen Horse Feeds, Protexin Equine, Premier Performance CZ, Just Equine, MacWet Gloves and NDS Equine for their support. 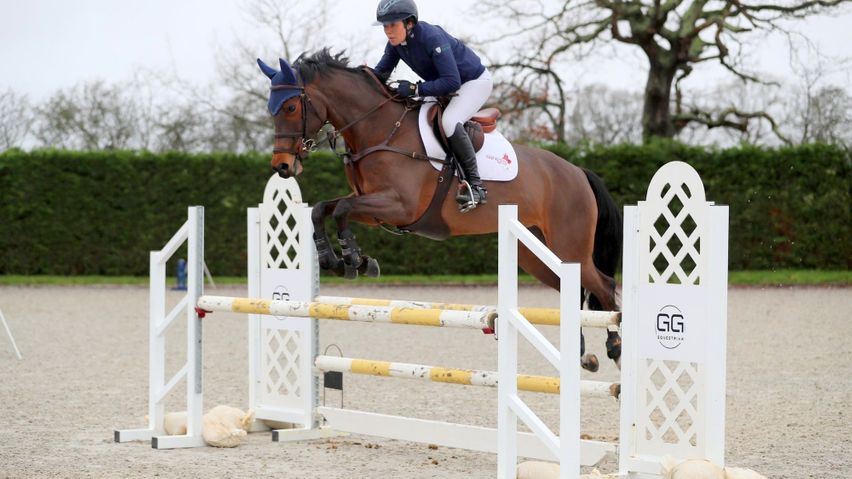 First show of the year was Hascombe with all four horses. I didn’t make the best start when I drove out of the drive with an open locker, leaving the door in the hedge. For some reason the locker light got stuck on drawing attention to the missing door the whole way to Hascombe! It was a cold, drizzly and windy day and more like the Wild West than a horse show.

First up was Askeaton. Her first show for seven months so I opted for the 1m. She was a little bit fresh and silly when we started working in, but she settled quickly and jumped a lovely clear round, BE Khalissy also jumped a lovely and very authoritative round in the same class. She’s definitely ready to step up.

Billy Breakdance didn’t have the best warm up, as it was very busy with very fresh horses, and he is a little nervous. He actually started very well and just got a bit tense after the first double so I turned a circle to settle him, but he jumped the rest well.

Billy Arietta seemed to be ridiculously fresh, and at one point I thought I was definitely coming off, but she settled to jump a good round in the 1.20. I’m still not entirely happy with our bitting arrangements, and she was definitely on the strong side in a nathe Pelham.

Many thanks to Lauren Andrews and Frankie Walker for all their help.

It's always hard trying to look back and be objective about 12 whole months, they flew by, but looking back January 2022 seems a very long time ago.

To sum up as succinctly as possible: by 4th January I had managed to fall off twice, 30 minutes apart! I then invested in an air jacket which made my two Autumn falls less painful. We spent half of February having COVID and isolating before April and I made it the whole way to Spain for four weeks of the Sunshine Tour. Although the sun was notably absent for most of the month of March,and Askeaton was lame for half the tour, we did actually have a great time. It was great to be back and to see the amazing expansion and improvements made there, it has to be the best facility in the world. Khalissy really got going and set the standard for her very successful year, and my lovely Arietta stepped up week by week, finishing with a placing in the final CSI1* 1.35 Grand Prix.

April and May were a bit calmer: Doonaveeragh Emma had her second beautiful colt foal, Alchornes Pure Gold, by Golden Hawk. The horses all continued to jump well and BE Khalissy in particular put in a stellar performance at CSI* Chard to jump four clear rounds and finish with 6th in the small Grand Prix.

We had a wonderful family holiday in France in June, and then very sadly April left to further her career with Gemma Stevens. April was my wing man here for four years, and losing such a very important part of a very small team was tough. Both Khalissy and Arietta continued to jump well, Khalissy consistently placing at 1.20 and Arietta jumping some great rounds at 1.30. Askeaton seemed sore again, and she took a very long summer holiday.

Finally we had a summer where not only did we go to parties, but we also had a party here to celebate my 60th birthday, and Polly, my sister's 50th birthday. It was a great day filled with friends and family.

Ellie Collins joined for the latter part of the summer before leaving to set up her own transport company. I have missed her bubbly company, and her brilliant care of the horses. I'm not good at change and did find so much in a short period of time hard, but we now have Lauren Andrews here who brings good skills and experience to the job.

Wondering if Askeaton was every going to make it back into the ring I bought Billy Breakdance in September. He is a charming horse, and is making really good progress. I failed to notice how tall he was before I got him home, but he is very polite and so hopefully won't get too big and strong for me.

All the horses were back in work by the beginning of November. Khalissy and Arietta came back in great form. I always ask Ed Lyall at Sussex Equine to give them an MOT before they compete and they passed with flying colours.

We had our last show of 2022 at Hascombe on 7th December. It was great fun to have Khalissy back in the ring. She felt like a proper expert, albeit only round the 1m, but certainly lovely to have her back. Breakdance jumped very well in the 1m and I rode him appallingly badly in the Newcomers for a couple of fences. Arietta then jumped a super round in the 1.20. It was nice to end the year feeling that I'm properly getting my teeth into the jumping again.

Askeaton has had some very special treatment with Arthramid, and just before Christmas she was given the go ahead to start jumping again. I had a lesson with Trevor Breen with her after Christmas and she felt fabulous, so fingers crossed that we can keep her sound and have some more fun together.

One of the big events of December for me was the Breen Christmas Auction where Alchornes Pure Gold was one of the horses up for sale. I am absolutely thrilled that he has been bought by Michael Duffy, he will have the very best chance to be the very best he can be, and hopefully will be a good advert for Emma and also pay back the faith that Shane showed by putting him forward for the auction and the Michael showed by buying him. Michael is a great fan of Golden Hawk, and always liked Emma so hopefully Tom will do him proud.

We have had the most magical Christmas with my sister and her children, and Anna and Sophie with their little families. Having a 3 year old and two toddlers at Christmas was wonderful, they were so good and sweet and Father Christmas really came up trumps with the stockings! The reindeer trampled ash all over the carpet, and ate their carrots very messily and Father Christmas drank his Aquavit (45% proof) and ate his mince pie. Hopefully not everyone gave him Aquavit or he'd never find his way home. There was a slight crisis before lunch as I forgot to take the turkey out of the freezer (mainly due to not reading the instructions properly) so we had lamb stew for Christmas lunch and turkey for Boxing Day lunch. Mark's sister Clare had to come back for Boxing Day to get her turkey. Perhaps not my finest domestic goddess performance, but everyone was very good about it.

Like everyone with horses Christmas has been frantically busy and very hard work, luckily Frankie Walker has been helping me out, and Mark has been a total hero while Lauren has been off with the horrible lurgy! I had a last lesson with Trevor before he flew off to Dubai, and will try and keep my bad habits in check till he gets back. I'm very much looking forward to 2023 with four lovely horses to jump. I will definitely be taking the sticky spray and the airbag to Hascombe on the 4th January.

As always many, many thanks and Happy New Year to the team who keep the show on the road. Mark, Lauren, Frankie and Sussex Equine, Cinder Hill Veterinary Clinic, Casserley & Sons and Caitlin McCaffery, and to my fabulous sponsors Saracen Horse Feeds, Protexin Equine, Just Equine, NDS Equine, and MacWet Gloves.